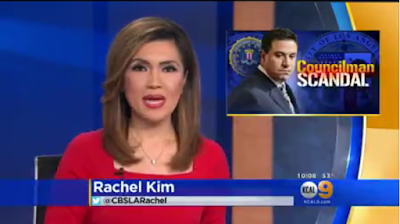 On November 7, 2018 the FBI conducted a series of simultaneous high profile raids of the home, field and City Hall offices of Los Angeles Councilman Jose Huizar. Although the warrants remain sealed, it has been confirmed that the FBI is working with the IRS on their investigation.

Soon after the raids, Council president Herb Wesson removed Huizar from his powerful committee positions, including chairmanship of PLUM, which makes all planning and land use decisions for Los Angeles. Huizar, who is rarely seen at City Hall now, has had no comment.
With so much new development happening in the city, especially in the Downtown portion of Huizar's CD14, it is difficult to get a handle on the numerous zoning changes and project approvals that might be subject to FBI and IRS scrutiny.

But we at the Pershing Square Restoration Society hope that careful attention will be paid to a curious chapter in the relationship between the oldest public park in Los Angeles and its council representative.

Pershing Square Renew is just one of the non-profits and public-private partnerships formed by Jose Huizar to promote his political brand. Developers pay in by the tens of thousands, and Huizar gets press attention for projects like Broadway revitalization (Bringing Back Broadway, Night on Broadway), a streetcar loop to L.A. Live (Los Angeles Streetcar Inc.) and, of greatest interest to us, a Pershing Square redesign (Pershing Square Renew Inc.). 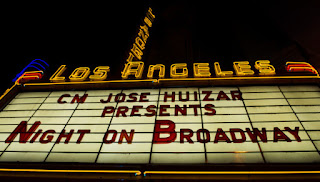 Although none of these campaigns have resulted in much beyond the initial project announcements, design competitions and street parties, there is something concrete that appears to coming directly out of Pershing Square Renew.

Presently, if you look on the California State DOJ Charities Registry website, you'll learn that Pershing Square Renew was cited for delinquency in August 2018 for failing to file its IRS-990 forms for its first tax reporting year of fundraising activity, 2015. Although this missing document means the public cannot see the official IRS accounting of donations made to Pershing Square Renew prior to its largest financial outlays, it was widely reported that developer MacFarlane Partners had donated a million dollars, and would be running the Pershing Square redesign initiative.

MacFarlane Partners is owned by Victor MacFarlane, who suffered a major professional setback when his ill-timed, high-risk real estate investments resulted in a loss of more than a billion dollars from the California state teachers pension fund (CalPERS), a loss that taxpayers must make good.

Last December, one of Jose Huizar's City Council committees unanimously selected the winning design and developer to build on one of the most valuable parcels in Downtown Los Angeles: Angels Landing at 4th and Hill Streets. This $1.2 Billion project, zoned to be the tallest building in the west, was granted to a partnership comprised of MacFarlane Partners, the Peebles Corporation and Claridge Properties. 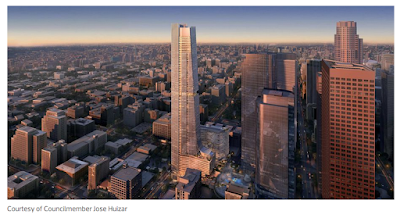 We will be watching with great interest to learn if our humble Pershing Square, a place that for more than 150 years has been the heart of the city's public sphere, a place of protest, repose, connection and conversation, has also played a role in uncovering a major public corruption scandal.

And once the indictments drop, the dust has settled and new leadership arrives in CD14, we will be eager to finally begin a good faith conversation about the future of Pershing Square, which we and many Angelenos believe would be best served by a restoration of John Parkinson's beloved 1910 design.

It's a curious footnote that John Parkinson designed the park for no pay, because he wanted to give something back to the city that had given him so much opportunity. In the spirit of John Parkinson, we call on Rec and Parks, the Mayor and City Council to Restore Pershing Square! Please sign if you agree. 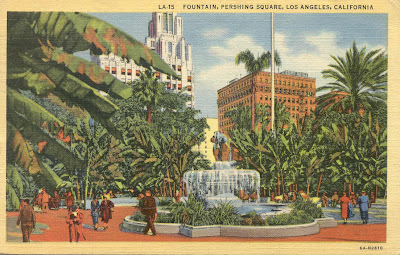 *  *  *
Update April 2019: the project has shrunk significantly, in what appears to be a bait-and switch by the "winning" developer. Update October 2020: developer seeks third extension to their expiring purchase agreement. Update March 2022: developer announces it has received full entitlements from City Planning, plans to move forward with project in next two years; note however that they do not actually own the property. See also the City Planning Project portal link for Case Number: ENV-2018-3273-EIR and note the fraud accusations starting on page 17 of this PDF in the Draft DEIR comment letters file.
*  *  *
Update June 2022: On July 1, 2022 City Council will hear a report from the city's Chief Legislative Analyst that spells out options by which the city could purchase the Angels Knoll parcel from the CRA Successor Agency for $50,000,000 and then sell it to the developer in December 2022. The report clarifies that there have been significant  management changes, and Victor MacFarlane is no longer a signatory to any deal, but only R. Donahue "Don" Peebles.
In response to the CLA's report, the developer's attorney James E. Pugh, Esq. from Sheppard, Mullin objects to the city's Repurchase Option should the developer fail to commence construction after ten years. Pugh mistakenly describes the language in "section 18(c)"as coming from "section 18(e)" and asks for concessions that would be more costly for taxpayers and more beneficial to the developer, in the event of a complete failure to develop the publicly-owned parcel.

The developer's attorney also objects to the city's prudent and reasonable refusal to agree to an unusual Transfer and Assignments clause that would allow Don Peebles to potentially hand this enormous project on public land to unknown parties who happen to do business with him.

We appreciate the CLA's office being careful with public funds and land, and continue to believe that all development projects associated with indicted former Councilmember Jose Huizar should be sent back to the drawing board for an open and impartial reconsideration. This is essential to rebuild public trust and ensure these projects are in the best interest of the taxpayers and the community. We think that Angels Knoll would be better if made into a city park instead of moving forward as a much smaller high rise development with fewer affordable units and less of so much that was promised when Jose Huizar gave the plum deal to the development team that supposedly financed his defunct nonprofit Pershing Square ReNew. 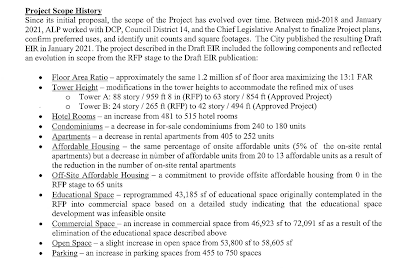 Our public comment in the Council File is here.

Help bring an L.A. icon back from the dead. Sign the petition to restore John Parkinson's 1910 design for our greatest lost park.

Send The Restoration Support Team A Message (to sign the petition, see link above)